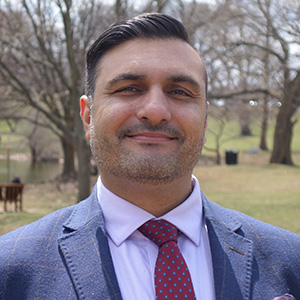 Office: Davison Hall, 132B
Email: This email address is being protected from spambots. You need JavaScript enabled to view it.
https://www.sociologistmusician.com/
CV

I am an Assistant Professor of Sociology and am currently a faculty associate of the Rutgers Program on South Asian Studies and the Center for Security, Race & Rights (Rutgers Law School). I am also a research associate of the International Migration Institute Network (IMI-n) based at the University of Amsterdam. My primary areas of research include immigration, nonprofit organizations, and the sociology of music. Through my research and teaching, I strive to unravel the embeddedness of social life in symbolic boundaries and group inequities. Accordingly, I am currently working on a number of projects, which investigate how symbolic boundaries premised on social categories of race, ethnicity, nativity, religion, and class, inform the structure and organization of immigrant integration as well as the production and performance of popular music.

My earlier work explored how racial group differences are strongly associated with prestige hierarchies within self-employment in the United States (Chaudhary 2015). My doctoral research examined how different historical and institutional structures in the United States, Canada, and the United Kingdom, resulted in different configurations of Pakistani immigrant nonprofit organizations (Chaudhary 2018; Chaudhary & Guarnizo 2016). In this work I further explored how race, nationality, and religion intersect and manifest as an organizational-level stigma that constrains the capacities for Pakistani nonprofits to facilitate integration and transnational development (Chaudhary-forthcoming; Chaudhary and Moss 2019). Before coming to Rutgers, I held a Marie Curie Early Career Post-Doctoral Fellowship at the University of Oxford. At Oxford, I investigated how immigrants residing in Europe engage in domestic and homeland-oriented electoral politics (Chaudhary 2018). In addition, I have been working with a group of sociologists at the University of Texas on a series of papers that examine the effects of religiosity on Muslim-American attitudes towards politically motivated violence (Acevedo & Chaudhary 2015) and Muslim-American identity (Chaudhary et al. 2019).

In an effort to expand sociological understandings of the intersection of race, immigration, and culture, my new research consists of three studies, which investigate how symbolic boundaries tied to group ascriptions (i.e. race, nativity, nationality, etc.) affect the consumption, performance, and production of popular music in the United States. The first study examines how racial boundaries in the recording industry influenced the racialization of the electric guitar as well as music genres intrinsically linked to it. A second study historical data and secondary research to examine the various ways in which several popular genres of American music were created through immigrant collaboration with American-born musicians during the during the 20th century. Finally, a third project uses historical census data and qualitative methods to examine how symbolic boundaries of race and nativity affect the employment of musicians in the United States during two periods: 1) 1950 to 2000; and 2) 2008 to 2019. Together these projects share an analytic emphasis on the embeddedness and influence of symbolic boundaries on the creation, performance, production, and consumption of popular music.